Muddled messages are still abounding about the merger or take over or whatever you like to call it with West Somerset Council. Facts are abandoned to be replaced by thinly veiled threats.  Having refused to consult with the electorate before the merger was recommended to central Government, we now have the unedifying sight of the two Leaders authorising their Chief Executive to make somewhat controversial statements to the press without even bothering to let their colleagues on the Councils know it is happening. 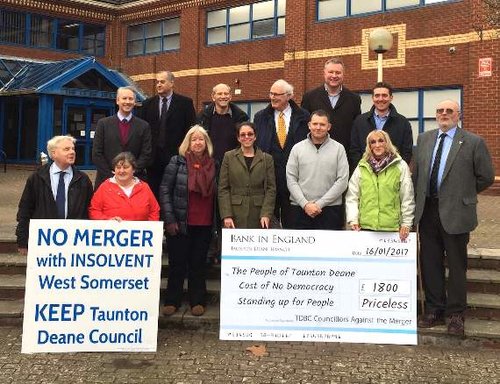 Is this the latest example of democracy as practiced by Conservative led Councils?    Blatant ambition to expand Tory administration paid for by ordinary tax payers!

This ill thought through venture with the failing council of West Somerset is continuing to cost Taunton Deane Council Tax and Business Rate payers heavily.  It has long been common knowledge, admitted by both Councils, that WSC was virtually bankrupt and yet this merger was recommended.  Other options involving more fundamental and possibly more viable mergers were summarily dismissed.

It has always been hard to see how the huge upfront costs of the merger and business plan are justified by the relatively small additional savings to be achieved long term.  Why should Taunton Deane residents subsidise West Somerset?

In the Municipal Journal on 30 August while our joint-CEO refers to both councils’ political support she does not recommend other councils to go down this road!  How odd is that?

Well, this merger may enjoy Tory political support but as has been amply demonstrated by various surveys, including one by The County Gazette, the general public does not.