Liberal Democrats across the Somerset West and Taunton Council area are celebrating after a third by-election win in less than three months.

Teacher Barrie Hall is the latest to join the Liberal Democrat administration on the Council after winning the North Curry & Ruishton by-election [24/06/21] with 798 votes compared to 678 for the Conservatives and 133 for the Greens. 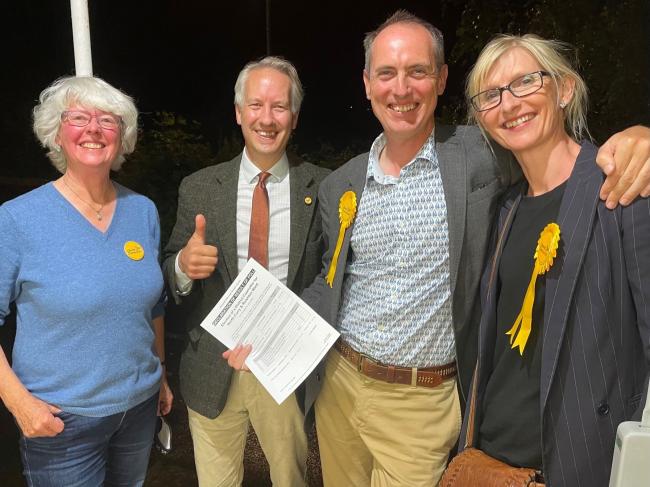 This comes a week after the party welcomed Cllr Stephen Griffiths to the Council after we held onto a seat in Old Cleeve & District and a month and a half after success for Cllr Dawn Johnson, winning in Trull, Pitminster & Corfe.

Cllr Hall said: “I’m honoured to be elected by people in local villages from North Curry to Ruishton and Stoke St Mary and to follow Phil Stone’s decades long liberal tradition in our area, but my first priority is to do my very best to represent everyone in the ward whether they voted for me or not."

Gideon Amos, Lib Dem parliamentary spokesperson, said: “I’m proud of our local government colleagues, such as Barrie, who are all focused as a team on listening to local residents, being careful with public money, taking forward our planet positive agenda and investing in our local community.

"The Lib Dem councillor team will now be working even harder for local people with a new member on board."

LibDem leader of the council Cllr Federica Smith-Roberts expressed her delight with the vote saying: “This is an excellent result for a great local  candidate.

"As the third LibDem by-election victory in the last two months this is another vote of confidence in the work of the LibDem administration on Somerset West and Taunton council; from building new council homes, protection of the environment and tackling climate change, to supporting our communities and regenerating our town centres, all whilst dealing with the effects of the pandemic and facing the yet further local government reorganisation being imposed on us.