The Somerset West & Taunton Liberal Groups have selected their new Executive to run the new Council. 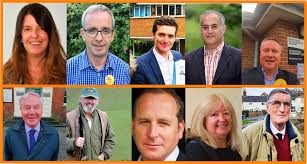 Led by the new Leader of the Council, Councillor Federica Smith-Roberts, the new Executive will be:-

Benet brings twenty years of experience in TV News to his new role of responsibility for culture and communications on the new Council.

Taunton born and bred, Chris represents the Halcon and Lane Ward and has done for 3 years. At 29, Chris is one of the younger Councillors and hopes he can inspire young people to get involved in local politics.

In Halcon, Chris has joined in a lot of community building and hopes to apply this to the wider communities of the new Council.

He is responsible for a variety of matters from town centre activity and community events, to rough sleeping oversight and police liaison.

Habib is a businessman who represents Comeytrowe and Bishop’s Hull. He has organised a major conference in Taunton where leading academics and experts explored the possibilities of making Taunton a beacon for new green technologies with an Innovation Centre, bringing higher paid jobs to the area.

Habib intends to work as a part of team to ensure that problems and challenges become opportunities. On the major decisions the business community and the public are an integral part of the solution. While in opposition Habib was already working closely with the business community and the excellent team of council officers on ideas to regenerate Taunton. With other councillors and officers, the team  intend to look at short, medium and long-term projects, prioritising the Firepool and Coal Orchard developments. Our new council covers a much wider area than Taunton Deane, so we need to understand the challenges that our partners in West Somerset are facing too and offer genuine support.  We need to make the most of the finances we have available to us so that we can collectively deliver prosperity and economic development throughout Somerset West and Taunton.

Ross is the Councillor for the Hatch and Blackdown ward. He is very passionate about the area he represents. He is a former leader of Taunton Deane Borough Council. As the Portfolio Holder for Corporate Resources. Ross wants the Council to improve its Customer Service and aspire to excellence in every way it interacts with the residents of Somerset West and Taunton.

Richard represents Victoria Ward and has been a Taunton Deane Councillor since 1999. After losing his sight, Richard gained a Certificate in Education at the Somerset College and in 2006 was awarded an Honorary Doctorate of Education by Plymouth University.

Currently employed as an Advocate with Swan advocacy, he has been an advocate for disabled people for over 19 years.  He was awarded the Taunton Deane Citizenship Award in 1992,   Richard was Mayor of Taunton Deane in 2005/6,and is currently a Governor at the Albermarle Centre in Taunton.

Richard has been the Executive member for Sports, Parks and Leisure during his time as Taunton Deane Councillor and hopes to use this experience to protect and develop leisure spaces and opportunities for all residents in Somerset West and Taunton.

Peter represents Old Cleeve and District. As a West Somerset councillor, Peter has already worked towards the goal of a carbon-neutral council by promoting the roll-out of an Electric vehicle charging network and has helped to secure £20,000 of funding for this purpose. This is just the start of a larger project to make local public transport accessible and frequent with electric buses. Peter is a rural housing network contact and is active in sourcing land for affordable housing and self-build projects.

He will be responsible for ensuring that all council policies and initiatives include a Climate Change Impact Assessment.

Mike is a qualified planner who has worked in planning and environmental consultancy for many years. Married with three children, he has been a county councillor for six years and decided to stand as a district councillor partly so that he could help local people with the whole range of council services. Having seen Taunton lose its shine over the last ten years, he’s particularly pleased to have been appointed as Executive Member for Planning & Transportation and will work as part of a tight team to deliver key projects including Firepool, the Garden Town, pedestrianisation and the Taunton Innovation Centre in order to boost Taunton’s fortunes. He’ll also work closely with the council’s leaders on climate change and environment to deliver greener transport options for visitors to the County Town.

Fran has represented Blackbrook and Holway since 2003.

Fran has been involved in housing issues for many years, including campaigning against the sell off of the council housing stock, and promoting the building of more social houses in new developments, she has previously been the shadow housing portfolio holder.

Fran's main responsibilities will be ensuring that housing is one of the main priorities of the council, working to increase the number of social houses being built, along side affordable housing whilst promoting good infrastructure of new developments to make the area a great place to live, also representing local people with housing issues and ensuring a high standard of duty and care is maintained.

Fran wants the new council to be open, transparent and customer focused.

A committed environmentalist for decades, Alan Wedderkopp  served on TDBC for 12 years as Deputy Leader and environment portfolio holder, when he was responsible for the installation of Solar panels on Taunton swimming pool, which are still producing an income for the council tax payer. He also inspired and set up the Art Walls enhancing parts of Taunton. He represents Wilton and Sherford..

Alan has a wide experience of life, including working in heavy industry worldwide,  which has inspired many of his ideas. Prior to that he was a regular soldier and spent two years on active service in Korea.

Alan will be responsible for many of practical things that affect our physical environment and quality of life, including dog bins, grass cutting, and many more.

One initial challenge will be bringing forward improvements to the service provided at the Crematorium.