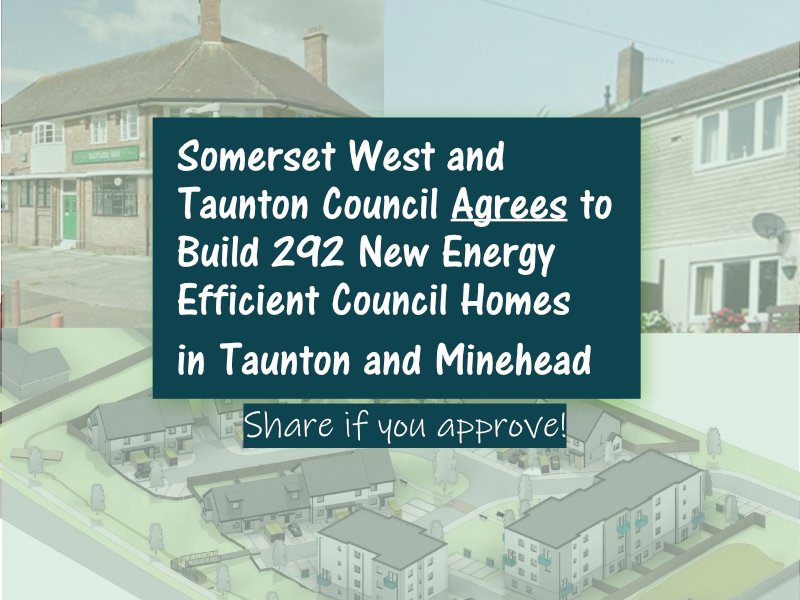 Liberal Democrat-led Somerset West and Taunton has approved plans to construct new social housing of a zero-carbon standard with 54 housing units at Seaward Way, Minehead and a further 11 units at the old Oxford Inn site on the corner of Roman Road and Outer Circle in Taunton. This means that tenants will have very low energy costs and are expected to be delivered by 2023.

Executive Member for Housing, Cllr Fran Smith, said: “We're delighted to be able to take the next steps on our journey to reaching a net zero carbon district by converting these dilapidated and unused sites into inclusive, affordable and energy-efficient housing for our residents.We've committed to delivering 1,000 new homes over next 30 years, of which at least 115 of these, including those proposed here, will exceed current building standards as ‘exemplar zero carbon homes’. What's more, the development proposed for Minehead will represent the first council homes to be built in West Somerset for over 30 years, of which, in the spirit of future growth, the final development address will be aptly named ‘Rainbow Way’!
The Council has also voted through the final phases of the North Taunton Woolaway Redevelopment which will now be low-carbon affordable homes, a change from the original plans under the previous Conservative. administration, once again meaning low energy costs for tenants. 162 defective Woolaway Homes will be demolished and replaced with 227 new homes whilst 27 properties will be refurbished. There will also be an emphasis on larger accommodation than current standards in the private sector, better site layout and green space. The project will be completed in phases over 8 years.